Poetry 4
The Language of Poetry
Reading Poetry
When you are reading poetry, ask yourself the following questions:

Is your reason for liking a poem because it:

Remember that you should attempt to "swallow the poem" rather than analyze it (see guidelines).  When you swallow a poem it is important to seek a clear understanding of a poem:


What is the poem about?

Should we swallow poetry or eat it?  Read the next poem for a poem that moves into fantastical realms:

Ink runs from the corners of my mouth.
There is no happiness like mine.
I have been eating poetry.

The librarian does not believe what she sees.
Her eyes are sad
and she walks with her hands in her dress.

The poems are gone.
The light is dim.
The dogs are on the basement stairs and coming up.

Their eyeballs roll,
their blond legs burn like brush.
The poor librarian begins to stamp her feet and weep.

She does not understand.
When I get on my knees and lick her hand,
she screams.

I am a new man.
I snarl at her and bark.
I romp with joy in the bookish dark. 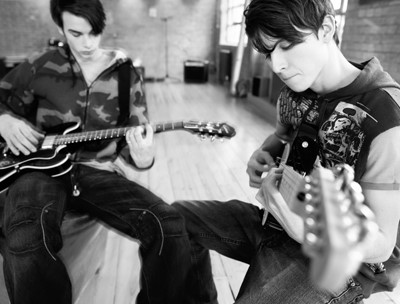 A NOTE OR TWO ABOUT WRITING POETRY


Poetry takes practice, like anything you need to work at in order to learn its ways. Take folding a sheet, for example. Remember the first time you tried to make the corners match up? Maybe you helped your Mom or Dad do the laundry as a child, and maybe they held two sides of the sheet and you did a little dance with your arms to get the cloth into smaller and smaller rectangles, until it was folded. These exercises will help you in a similar way.

Malcolm Gladwell popularized the idea that in order to become an expert at something you need to do it for 10,000 hours. Let's get started, then. Life is short!!

But what do you write about?

Even though we've already talked about this, the idea of poetry needing to be about lofty subjects is one our inner critic likes to pull out again and again. Don't listen to that critic! Poetry need not be about anything that people like to call profound or earth-shattering. We are all humans, going through human experiences. Poems can be about telling our unique ways of doing this.

o    Make a list of things that make you happy.
o    Shape it into a free verse poem.


Read and listen to the two poem's below for inspiration:

--  Figurative language uses images that cannot be taken literally, i.e., abstract ideas.  However, this technique usually works best when the comparisons are based on accurate and realistic details.

--  Sometimes comparisons are similes-- simply stating that an object or an idea is like something else.

--  Similes use ‘like’ or ‘as’ to show the comparisons

--For example, “A nice warm sloppy tilting belly…like a bowl of porridge” (Mitchell 2), or “Tangy as blackberries, luscious as avocado” (Mitchell 16)

People are lovely to touch--
A nice warm sloppy tilting belly
Happy in its hollow of pelvis
Like a bowl of porridge.

People are fun to notice--
Their eyes taking off like birds
Away from their words
To settle on breasts and ankles
Irreverent as pigeons.

People are good to smell--
Leathery, heathery, culinary or Chanel,
Lamb’s wool, sea-salt, linen dried in the wind,
Skin fresh out of a shower.

People are delicious to taste--
Crisp and soft and tepid as new-made bread,
Tangy as blackberries, luscious as avocado,
Native as milk,
Acrid as truth.

People are irresistible to draw--
Hand following hand,
Eye outstaring eye,
Every curve an experience of self,
Felt weight of flesh, tension of muscle
And all the geology of an elderly face.

Are people easy to write about?
Don’t say it.
What are these shadows
Vanishing
Round the
Corner?


--  In Seamus Heaney’s poem “Follower” there is a strong visual picture of the poet’s father ploughing: "His shoulders globed like a full sail strung/ Between the shafts and the furrow" (Heaney 2-3).  Notice the metaphor of the sea that runs through the poem--list the metaphors are you able to find (note: a simile is a metaphor, but not all metaphors are similes)

My father worked with a horse-plough,
His shoulders globed like a full sail strung
Between the shafts and the furrow.
The horse strained at his clicking tongue.

An expert. He would set the wing
And fit the bright steel-pointed sock.
The sod rolled over without breaking.
At the headrig, with a single pluck

Of reins, the sweating team turned round
And back into the land. His eye
Narrowed and angled at the ground,
Mapping the furrow exactly.

I stumbled in his hob-nailed wake,
Fell sometimes on the polished sod;
Sometimes he rode me on his back
Dipping and rising to his plod.

I wanted to grow up and plough,
To close one eye, stiffen my arm.
All I ever did was follow
In his broad shadow round the farm.

I was a nuisance, tripping, falling,
Yapping always. But today
It is my father who keeps stumbling
Behind me, and will not go away.

A metaphor is an implicit comparison between two unlike things that have common likeness.

By using a metaphor, the poet generally suggests that one thing is another thing.  It is a comparison that is suggested or implied rather than stated.

Metaphors are often used in slang.  For example, “He’s a nut” and “she’s an angel”

--The poet needs a great number of metaphors, because if ideas are expressed literally, most of the imaginative appeal is lost.


The following poem, "Litany," by Billy Collins contains a great number of metaphors, where he is -making fun of metaphors about love, by writing a litany of them.  He is speaking tongue-in-cheek about his observations on love, or more tellingly toward his own relationship.
Ezra Pound, one of the founders of the Imagist movement in poetry, which began in the early part of the 20th century, rebelled against formal Romantic poetry. He believed that images were everything--that to use exact, direct language made more of an impact than flowery prose.

Here is Ezra Pound's two-line poem that uses metaphor, or direct comparison, implying that one is the other.  The poem is expressed with such clarity that it is hard to miss the visual impact it has on the reader.  As poet, Mark Doty suggests, the poem reminds him of "the sensation of being in a New York subway, the car doors opening, and suddenly there’s a scene framed by the doors," and within the brief but telling lines, the metaphor suggests, " ...that the faces as “petals” were once conjoined. They are the remnants of shattered flowers.  There's a sense of a continuum of life, a kind of human brightness. The human face is what blooms, renews, and shines in the dark" (Doty). 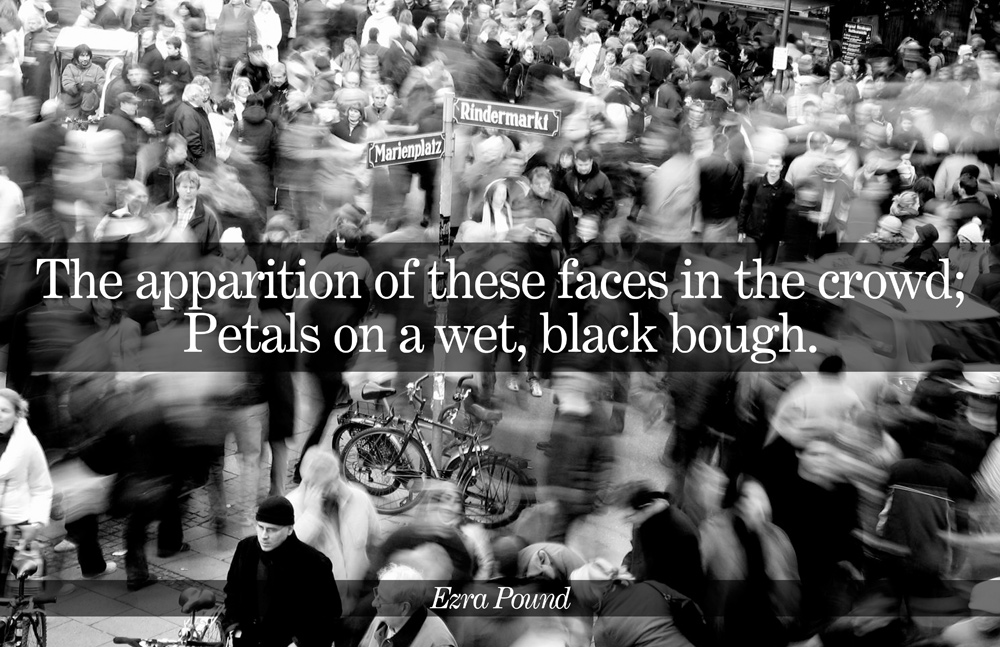 Image source: http://quixoticlife.net/files/art/31-ezrapound.jpg
Poetry Writing #10: What do you see?


The Rules of Imagism:

Ezra Pound, one of the founders of Imagism, said that there were three tenets, or rules, to writing Imagist poetry.


Activity 2: In the next two poems, identify the metaphor and similes

Our marriage is water running
In a bathtub with no plug.

For a moment, I want to disagree,
then don’t, impressed by the image:

your image, for what it is, after all
only you and me.  Or, me and not

enough of you. But then, language
doesn’t always connect so truly

to somewhere else: fall over and across
another thing just so, neatly joining

worlds together, like difficult puzzles
working out suddenly, from new-angled

words and other meanings piling on--
like those  many-layered fountains

you loved, at the gardens in Istanbul,
which in their motion are symbols of

an Islamic paradise in letterless
signs more pure than if written;

like cold champagne cascading
over wide glasses at a wedding

Personification is a type of metaphor.  It gives human qualities to an inanimate (lifeless) object or abstract idea. It lends vitality to poetry and permits the poet to give emotions to inanimate objects.

“The wind exhaled October like a threat” (“Window”, by Richard Greene)

Swallowing a Poem #6: "Window"
Identify personification—what is personified? How is it personified?

A window gathered light from the sky

and argued for life in a bad time,

as amid gesticulating boughs

of stripped maple, its crooked finger

an unseen orator spoken in mime.

and stirred the leaves to riot

that merely loitered in their discontent.

The house itself leaked spirit

through the roof and walls,

not ready to renounce its true estate,

where the window gathered light

Take a look around the place where you are reading this.  Write down five things that you see.  They don't have to be earth-shattering.  It is better if they are not.  Make them into your titles.  Free write your ideas about each inanimate objects:  What does it do? What does it look like, smell like, taste like, feel like, sound like? How does it move? What would it say (if it could talk)? …

--  Use the language in your free write to create an extended personification poem on at least one of these objects.

Let the rain kiss you

Let the rain beat upon your head with silver liquid drops

Let the rain sing you a lullaby

The rain makes still pools on the sidewalk

The rain makes running pools in the gutter

And I love the rain.