Myths & Facts
Background: Facts and Myths about Anti-Homophobia Education (from the BC Teachers’ Federation, www.bctf.ca/SocialJustice.aspx?id=10392)
Sometimes people make assumptions about what is taught in schools without accurate knowledge. Misconceptions lead to emotional reactions including anger, anxiety, and fear. Here are some facts to help you better understand how schools operate


Myth 1: Teaching about homosexuality in schools condones the lifestyle.

Fact 1: Lesbian, gay, bisexual, and transgender (LGBTQ) people have lives like everyone else. There is no distinct LGBTQ “lifestyle.” Teachers often teach about unfamiliar topics to help students develop respect for other people and to acknowledge their contributions to society. A teacher’s job is to present accurate, age-appropriate information to students.

Fact 2: Anti-homophobia education can be done in a variety of ways. With the exception of some topics in Health and Career Education classes, teaching anti-homophobia involves no discussion of sexual behaviour or sexual practices whatsoever. Teachers may talk about LGBTQ role models in history, or read a story about same-gender families. They may also discuss the oppression of LGBTQ people and focus on stopping homophobic name-calling in schools. These are just a few examples of age-appropriate anti-homophobia education.

Fact 3: Teachers and principals have a legal obligation to respond to all forms of harassment and discrimination in schools. All students have the right to attend school in a safe environment—and expect to see their lives positively reflected in curriculum and classroom activities. Just as antiracism and multicultural education have been embraced by educators as worthy topics, there is also a growing awareness by educators that anti-homophobia has to be addressed. You do not have to be a person of colour to care about racism. Similarly, you do not have to be LGBT to fight homophobia in schools or society at large.

Myth 4: Gay-Straight Alliance Clubs (GSAs) in high schools are a way to recruit students and encourage them to experiment with being gay or lesbian.

Fact 4: No one suddenly chooses to become LGBTQ simply because they heard about the topic in school, from friends, or via their social circles. There is no known “cause” for a person’s sexual orientation or gender identity—whether that person identifies as homosexual, heterosexual, bisexual, or transgender. Sexual orientation and gender identity are complex traits, and have been understood differently by different cultures and at different times in history. GSAs help all students to come together in a safe space to talk about issues that are important to them. GSAs help all students to learn from one another and make their school safe and more welcoming for students, staff, and families. Anyone can be the object of hateful slurs, irrespective of their sexual orientation or gender identity

Myth 5: Students will become more sexually active and/or promiscuous if they hear about LGBTQ issues at school.

Fact 5: Like it or not, some teenagers are sexually active. The decisions they make about their bodies have little to do with LGBTQ issues or anti-homophobia education. However, lack of information about safe sex can have dramatic and sometimes tragic consequences for youth. Promiscuity and unsafe sexual behaviours often occur when students do not have access to age-appropriate, accurate information.

Myth 6: LGBT issues are not part of the curriculum; some schools are just making this up.


Fact 6: The mandatory curriculum is established by the Ministry of Education. The Health and Career Education curricula include references to sexual orientation, discrimination, and sexual health. Social Studies includes curriculum on families, Canadian society, and human rights. Furthermore, public schools are secular, and have an obligation to be inclusive of the diverse communities they serve including lesbian, gay, bisexual, and transgender people.

Anti-homophobia education is…
• inclusive of all members of our school communities.
• respectful of differences and inclusive of diversity.
• respectful of the BC Human Rights Act and the Canadian Charter of Rights and Freedoms.
• mindful that harassment and discrimination are present in our school system.
• mindful that silence around certain topics can be a form of discrimination.
• optimistic that a better school environment is possible for everyone.

Anti-homophobia education looks like…
• schools where all members of the school community can be accepted and open about their lives without fear or shame
• classrooms that acknowledge and respect diverse family models
• classrooms that acknowledge and positively represent the lives of lesbian, gay, bisexual, and transgender people across the curriculum • schools where students and educators speak out against injustice and inequity
• schools where youth can take the lead on concerns that are important to them
• school districts where there is knowledge and expertise available to support schools in this work.
Heteronormativity

It finds its most basic expression in statements like 'It's not normal' or 'It's not natural' to love or be attracted to someone of the same sex.

It finds its most extreme manifestations:

But heterosexism can take many much milder forms, which are nevertheless painful to experience and are often cumulatively damaging.  Here are a few examples, which should be of particular concern to educationists:


There are many more examples of heterosexism/heteronormativity which could be mentioned, both in and outside schools.

The reality is that all LGBT people have to function in a world which almost everywhere shows itself deeply hostile to their deepest feelings, their most cherished relationships, their most personal aspirations.  This is particularly hard upon young people, who are often confused about their feelings, scared of public exposure and mistreatment, and unsure of where to turn for sympathetic understanding.

In a society in which selected moral issues are being put insistently on the agenda by government, it is time that more thought was given to the morality of allowing young people to grow up in ignorance, loneliness and alienation.  It may be the case, perhaps, that you yourself have behaved in the past in ways that you are now coming to recognize as heterosexist/ heternormative whether by omission or commission.   It is best to resolve that the time has come for change.

Watch the following commentary on homophobia and gay marriage:
Henry Rollins is an American singer-songwriter, spoken word artist, writer, comedian,publisher, actor, and radio DJ (from BigThink.com).
﻿Padlet Discussion Board: Are we moving forward?﻿
Everyone has the right to hold opinions without any kind of interference.  Freedom of opinion and expression are fundamental rights of every human being. This freedom is indispensable for individual dignity and fulfilment, they also constitute essential foundations for democracy.  With the advent of social media, we live in a time where we broadcast everything to hordes of people we don’t know.  In providing your view via social media, you open yourself up to the world, and on occasion the world hears what you have to say--especially when it is controversial.   in the following YouTube video, John Iadarola reflects on the fact that we have this wonderful venue for sharing and publicizing our beliefs, but many people don't have the strength to stand up to their beliefs.  In this case, a Toronto school board official shared his perspective on the Pride Parade and on transgendered people.

"If you are not willing or comfortable in person to defend your beliefs, that means that on some level they understand, either that they are wrong, or that it is simply not acceptable." (John Iadarola)
Created with Padlet

The following material has been adapted  from BCTF--A Chronology of Advances in LGBTQ Rights in Canada.


Since 1969, there have been many changes in the state of lesbian, gay, bisexual and transgender (LGBT) equality rights across Canada. For example, most provinces and territories added “sexual orientation to their Human Rights codes, starting with Quebec in 1978 and then Ontario in 1989. Alberta’s human rights code was amended only by decree of the Supreme Court of Canada in 1998, as a result of court action launched by Delwin Vriend, a teacher in a private school.

Using an online presentation tool (for example, Tiki Toki--a timeline maker, Prezi, or Powtoons), create a timeline or presentation that illustrates advances, federally and provincially. This project must include the human element, such as legislators and activists who have encouraged or initiated changes in laws and policies. These include activists at a local level, in your school district or community, if possible.

Choose one of the following topics for your research:
• advances in LGBT rights in BC and Canada
• role models in the struggle for LGBT social justice

Using print, online, visual, and interview sources (as appropriate), conduct your research to discover the following, as applicable:
• the main facts of the topic or individual’s life
• any resulting accomplishments or significant changes
• effects on our laws or society.

You will present this information in a speech format to the rest of the class, such that you may pre-record your presentation and share it on Google+, or if you prefer, present it during our discussion meeting.
﻿Listening & Writing Activity: Everyone's got a story﻿

Click on the image to the left, and hear Shaun's story. After listening to the story, watch Shaun's video.  I've also added Jane Lynch's story to the mix.  Feel free to listen to further stories from The Moth in order to get your creative mind working.  Take note of the story telling devices that the storytellers use that help hook the listener, make the listeners laugh or cry, or both.
Everyone's got a story.  What's Yours?

The image above is from The Moth website.  The Moth is a venue for storytellers to tell their true stories based on a particular theme.

"The Moth shows are renowned for the great range of human experience they showcase. Each show starts with a theme, and the storytellers explore it, often in unexpected ways. Since each story is true and every voice authentic, the shows dance between documentary and theater, creating a unique, intimate, and often enlightening experience for the audience.  Moth stories dissolve socio-economic barriers, expose vulnerabilities, and quietly suggest ways to overcome challenges and see with new eyes."  (Moth website)


YOUR TASK: Think of a significant incident, or event, in your life. This might be the birth of a sibling, a special trip, the loss of a pet, a move to a new place, the ending or beginning of a relationship, something you have accomplished, a challenge you have faced, or any of a number of things that have happened in your life that are meaningful to you.   Think of why this event holds significance to you.   The secret to writing a personal narrative is: Write what interests you most.

The final step in this journey is to narrate your story.
Some tips: You can record your narration with an iPod of smart phone into an mp3 format, or you can create a PowerPoint and use the narration features to record your voice, you can take a video of yourself narrating the story and submit the video file. You could use online tools like Audacity,  Screencast-o-matic,  Voaroo, or Camtasia


NOTE: This not a formal essay, but you should have a clear introduction and conclusion. It should be written in first person ("I") and should be organized in distinct paragraphs.


Make sure you reflect upon the significance of this event to you. This composition should be short, approximately 600-­800 words.. Good luck!


WHAT IS A NARRATIVE?
“Narrative” is a term more commonly known as “story.” Narratives written for school or personal narratives, tell a story, usually to some point, to illustrate some truth or insight. Following are some tools to help you structure your personal narrative, breaking it down into parts. 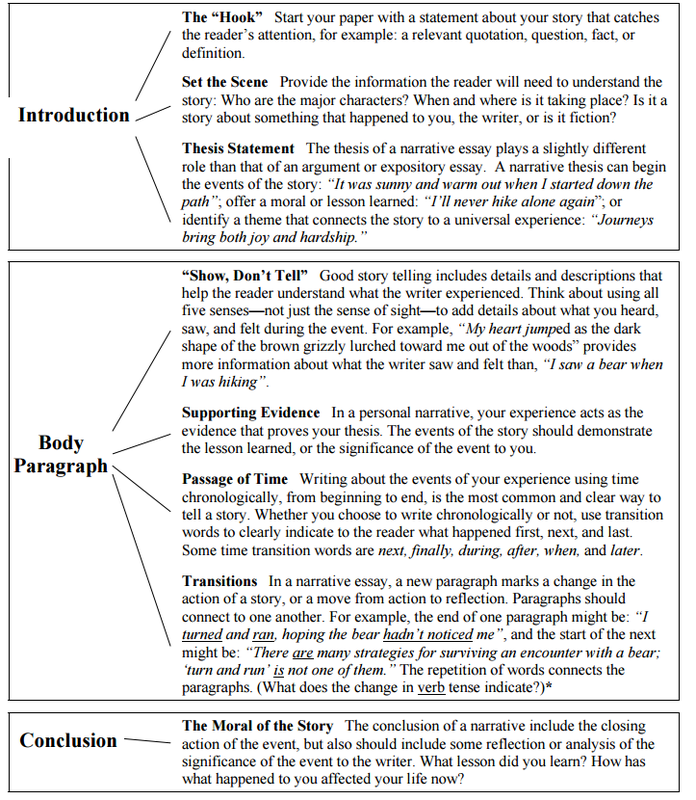 “Remember, the change you want to see in the world, and in your school, begins with you.”
― Joseph Clementi